Hello! Aggie here, writing about the AMAZING and HORRIBLE trip we made to the Hood Canal. I’m writing it because Mom is LAZY (just like Charlotte!)

After Mom got her lazy butt up on Tuesday, we packed the car. I knew we were going somewhere FUN because all the camping stuff was shoved in there. Of course, the drive was TERRIBLE because Mom and Dallas took the front seats, so I had to sit in the back with Charlotte, who never sits still in the car and always sits on me. She’s very undignified.

The day was warm and the sky was blue (so they tell me, I’m not too good with colors, because I’m a dog.) We drove up the East coast of the Olympic Peninsula to our campsite. Mom said that this park was pretty nice; big camping spots, lots of Western Red Cedars and Alders and Douglas Firs. The only thing she didn’t like was the nearest toilet was a pit toilet (I didn’t care though; the world is my toilet!)

I love camping and being outside and stuff, but Mom said that because I want to chase every creature I see and scare people with my big SCARY bark, I’m not allowed free and have to stay on a leash, just like Charlotte. She says people are “allowed” to be at campgrounds, but I’m suspicious.

Also, because I’m on a leash, the Gatsbys (Squirrels) think they can run amok. There were TWO of them on the ground and I couldn’t defend our campground from them! I tried to explain to Mom how dangerous they are, but she doesn’t believe. She doesn’t realize that if I didn’t defend the house from Gatsbys (Squirrels), cats, crows, strange dogs, UPS man, pedestrians, plastic bags blowing in the wind, etc, every day, we would be invaded. They would come in to our house and eat all our food! (Even though Charlotte already does that)

After camp was set up, we ran across the highway to the other part of the park, where I saw Gulls and Pigeons (including one that was white with black spots like a Dalmatian!) Mom let us swim around in the water, and as usual Charlotte embarrassed everyone because she had to be all dramatic and Mom yelling at her not to drink the water or float away across the canal.

Next day I had to wake up Mom and Dallas because they are LAZY and I had to POOP.

Then we went to a trail about an hour north of the campground called “Lower Big Quilcene River.” Mom said she wanted to do one that was in the forest with water nearby because Charlotte is old and needs a lot of water. Big whoop. Of course when it’s just me, she takes me to the freakin’ DESERT.

The trail didn’t have a lot of elevation gain, which doesn’t bother me, because I’m close to the ground and have four legs, like normal, while Mom and Dallas have to walk on only two legs and also carry a bunch of water for Charlotte. Though they also bring snacky-snacks and Slim Jims (Mom says I can’t have the chocolate because I’ll have “booty problems,” like that time I ate the kit-kats. Worth it!)

The trail eventually descends to meet the river after several tiny stream crossing, most of which were dry (because it’s August, duh!) and the water was nice and cold and clear. Charlotte almost floated away again but no such luck.

We crossed 5 bridges and veered onto a different trail called “Notch Pass.” Then, because Mom can’t read maps or do anything right, we ended up going back the same way we came.

After the hike, we made a boring slow drive up a bumpy road so that Mom could take pictures of the “view” (at Mount Walker.) We didn’t even do any hiking, just standing. We did this hike two years ago, two miles and 2000 foot elevation gain (good thing I use all my legs, like a normal person,) but the top was 100% obscured by fog. This was our delayed “reward.” 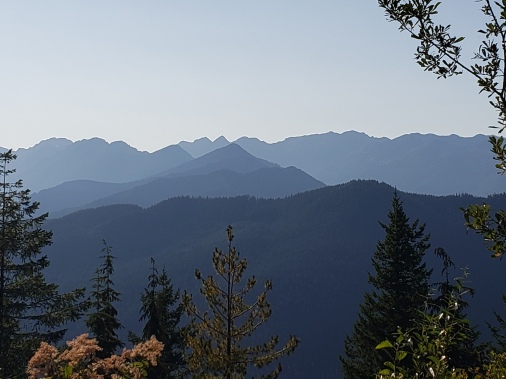 Later that night, we earned some quality snoozes.

Mom said I’m funny because when I’m ready to go to bed, I get up and go into the tent by myself. She may laugh, but I’m the one sleeping cozy with my butt on her pillow.

View all posts by respekt1111